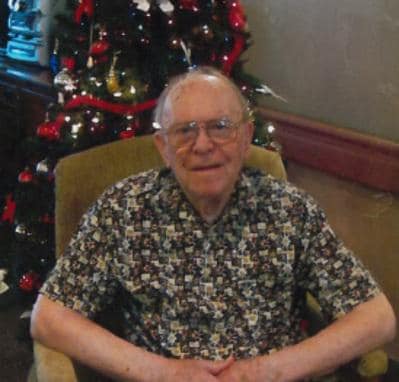 Today’s blog is written by guest bloggers, Steve and Naomi Tweet. They will be sharing this essay during worship this coming Sunday, October 13th.

Naomi and I were asked to talk about ordinary people who do extraordinary things.  As part of a church, the two of us have seen how God uses each of us, though we are just one, in ways that have lasting effect. And as we thought about this subject some more, we realized we wanted to talk about one person –  someone we knew well, my Dad, Arthur Orlando Tweet.  It is really a story many of you could tell in one form or another about one of your loved ones or friends, who without fanfare did some extraordinary things.

I know Dad is up there somewhere in that beautiful cloud of witnesses, close to Mom, so I hope I get the story straight.  What follows will be a tale of Dad’s devotion to family, faith, country and other people.

First, Dad was all about family.  His story begins in 1919,  Arthur was the youngest of 6 kids.  His father was a second generation Norwegian farmer in Iowa, who became a blacksmith to supplement family income.  The family was financially poor.  Grandpa Tom was too kind to ask for payment for those who couldn’t pay him for his blacksmith services during the hard times caused by the great depression.  However, they got by, took care of each other and never lost their faith in work,education and God. Dad’s mother and father were devout. They tithed from their small depression era income. Grandpa Tom was a Sunday School teacher and choir director in their small Iowa congreation.  Dad brought that ethic to the family he started after coming home from the war.  Dad, and my amazing Mom, Rosella (again, she is up there next to him in the cloud of witnesses) raised three boys on the modest salary Dad earned as a police radio technician.  Dad, like his folks, believed in the discipline of tithing. As soon as he got his pay check he put cash aside in an envelope in his dresser drawer. We kids knew that was untouchable and for “God’s Work”. He made sure to teach us right from wrong, but like most kids we learned our best lessons by example.  What we do, of course, always speaks louder than what we say.  Dad was a man of his word,  He guided us when we needed guiding and he trusted us when we needed trusting even with the outcome might be a bit dicey.  I remember introducing Naomi to my Dad and Mom at the tender age of 19.  No job, no money.  I told him that this was the girl I wanted to marry.  He took me aside and, being a man of few words he asked:  “You sure?”  I said, “Yes, Dad”.  He smiled and responded “OK”.  He was always there as our little family grew.  He did handy work around our house, he built a wonderful doll house for Sarah and a sandbox for Sarah and David.  He and Mom took care of our kids when we needed it. Dad and Mom raised three sons.  One is a physicist, one is an accountant and the black sheep (there is always one in a family) became a lawyer.  At the end of his life, three children,7 grandchildren and 6 great-grandchildren who loved him dearly were the result.  My daughter, Sarah, spoke at his funeral and noted that Dad was her emergency “go to” person–someone whom she loved and she could always count on.  He often said, “I can’t believe I have this amazing family!” Good job Pop.

Second, Dad’s faith was at the core of his identity.  His love for Jesus and belief in His saving power and grace  did not waver during Dad’s life.  That faith, of course, was impressed upon his children from birth.  Anyone who knew him knew his witness; again, not so much by what he said, but by what he did. He served as treasurer of our church in St. Paul, Minnesota.  He had a beautiful singing voice, sang in the choir and soloed frequently.  (He sang Beautiful Savior at our wedding, by the way).  At Holy Cross he spent years on the Tuesday crew and was a choir member until age took its toll.  He had theological discussions with others and was not afraid to express concerns, but he could not conceive of his life without his church community. Being a man who loved sacred music his entire life, the great hymns of the church were also powerful forces in his life. One day after church, near the end of his life,  Naomi and I visited my Dad in his care facility.  Most Sundays we would bring him the bulletin, read the lessons read the prayers and mention the hymns we sang. On this Sunday, one of the hymns of the day was  “My Hope is Built on Nothing Less”  which is set to the tune of the Naval Hymn.  My Dad loved that hymn. Alzheimer’s disease had ravaged his memory and his ability to express himself and he was barely able to put two sensible words together, however on that occasion, when Naomi and I began singing the hymn for him, he grabbed the music from us and began singing along.  It was one of those little miracles we were so grateful for as he bravely faced the end of his days.

Country.  When the Japanese bombed Pearl Harbor, Dad, an Iowa farm boy who had never seen an ocean joined the Navy.  As the youngest son of a farm family, and with his other brothers and sisters also joining the cause, he did not have to go–but he felt he must. Like so many members of the greatest generation he felt obligated to fight for his country. When my Dad enlisted his sister Louisa gave him a small devotional called “Strength for Service to God and Country”. He treasured that small book he took to heart and read it through his war years. We keep it next to his Navy photograph in our home.  Many passages speak to us today about our own service to others. Here is one from Jan. 14., “To live hopefully and courageously today is not easy. To do so a man must dedicate himself to something beyond his little self. After all, a life that ends with self has a belated and shallow philosophy upon which it is founded. These are hours in which eternity is compressed, and none of us can afford to live superficially.” I think Dad joined the Navy because he was a wiz at electronics and radios and he thought the Navy might let him use those skills and also teach him Morse Code.  (As an aside, Dad once built a home made crystal set radio that he set up–with antenna– in the family barn so he could hear Dutch Reagan broadcast Chicago Cubs baseball games).  Anyway, Dad learned and mastered Morse Code in the Navy, and was promoted to the rank of Chief Petty Officer. As Chief Petty (and communications) Officer aboard ship he had the immense responsibility of communicating orders and responses during the fighting, sometimes while his ship was under attack.  During the invasion of Italy Dad was a  Morse Code operator aboard a small vessel off the Italian shore, relaying orders to the invading troops.  The senior officer aboard that small vessel (presumably issuing those orders) was General Eisenhower. After VE day Dad was transferred to the Pacific theater to fight the Japanese.  He was part of an Armada preparing to invade Japan when the atomic bombs were dropped on Hiroshima and Nagasaki.  Dad said many times over the years that he was certain he would not have survived an invasion. 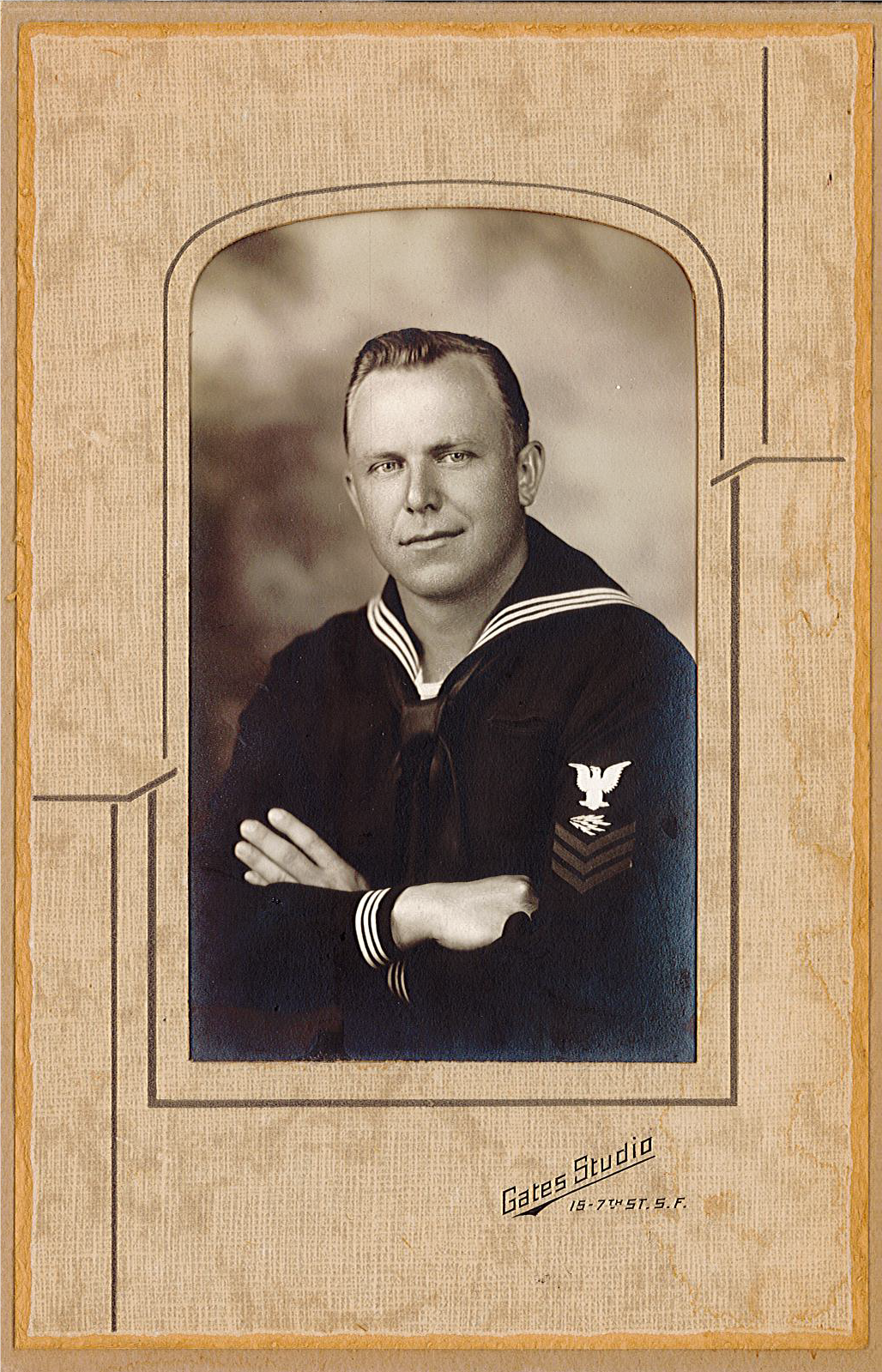 Finally, Dad loved helping other people. He said many times that he wished he had been able to serve as a missionary.  But he found many other ways to live his Christian faith and fulfill his desire to serve his fellow man.  As you know he used his talents as a singer and all around handy man to help the church he loved.  But he also found great satisfaction when he began a ministry to shut-ins through the Meals on Wheels program.  For many years he served folks who were alone and could not easily leave their homes by bring them a hot meal and warm friendly conversation.  He was a natural.  When the Statesman Journal sought someone from the program to feature in an article, the Meals on Wheels folks mentioned Dad.  It was great to open the paper and see my smiling Dad delivering a meal to a smiling woman who was looking forward to his conversation as much as the food.

My Dad was a humble man who overcame poverty, loved his family, served his country bravely, did his job and helped others in need along the way; and day to day, did courageous and extraordinary things that will always be remembered by those that loved him. We offer you these stories to you as witness of how God moved in my Dad’s life. May God bless each of you to experience and witness similar miracles in your own lives.